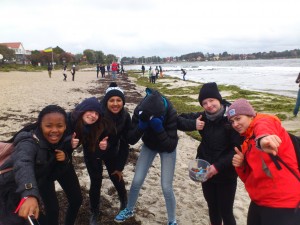 Wednesday was service day at the Round Square International Conference in Louisenlund. I was assigned to a larger group of ~60 delegates, all of whom would be participating in a cleanup of a local beach in the town of Eckernförde, just off the Baltic Sea. When we first arrived, I remarked to a friend that there really wasn’t much to clean: the beach looked spotless!

Boy, was I ever wrong.

We split into two groups and got our hands dirty, closely inspecting the sand for any trash in need of proper disposal. Amazingly, after a short half hour into our search, we had amassed several bucketfuls of various types of trash, including cigarettes, straws, wrappers and other unrecognizable pieces of plastic.

On Tuesday night, we were shown a clip about the staggering “Great Pacific Garbage Patch.” It explained how the plastics in most consumer goods degrade extremely slowly in the ocean, though ultimately disintegrating into microplastics, or tiny pieces of plastic less than five millimetres in size. These plastics become extremely difficult to filter out from the seawater because they are so small, yet they still pose a deadly threat to animals and to other members of the aquatic and even terrestrial ecosystems.

We were stunned by just how much garbage we had collected during our short walk on the beach, especially after having been told that the particular beach we were on was being thoroughly cleaned weekly by the tourism office of the town. All the plastics we had found had essentially been washed ashore by the rolling waves of the Baltic Sea within the preceding few days, which is extremely concerning, especially seeing that we barely notice the issue of our polluted oceans on a day-to-day basis. –Adam Vandenbussche ’17