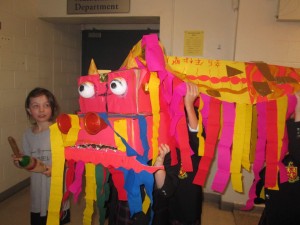 There are currently dozens of lovely, colourful, hand-made Chinese lanterns hanging from the ceiling of our Junior School corridor.  There is also a 30-foot Chinese Dragon lying in wait on the floor. It was made by students in art class and came to life recently in the children’s enthusiastic Chinese New Year Dragon Dance.

The Chinese New Year began officially on January 31st, the start of 4,712, the Year of the Horse. Legend has it that in ancient times, Buddha asked all animals to meet him on Chinese New Year. Twelve came, and Buddha named a year after each animal. People born in each animal’s year carry some of that animal’s personality. Those born in the year of the horse (also 1990, 1978, 1966, 1954) are reputed to be cheerful, skillful with money, creatively talented, good at building with their hands, perceptive and witty.

At Chinese New Year celebrations people wear red clothing, decorate with poems on red paper, and give children “lucky money” in red envelopes. Red symbolizes fire, which according to belief can drive away bad luck. The fireworks that shower the festivities are rooted in a similar ancient custom. Long ago, people in China lit bamboo stalks, believing that the crackling flames would frighten evil spirits. Chinese lanterns adorn temples, and people carry them in evening parades under the light of the full moon.

The highlight of the lantern festival is usually the dragon dance. The dragon, which may stretch as long as 100 feet, is typically made of silk, paper, and bamboo. The dragon is usually held aloft by young men who dance as they guide the colourful beast through the streets. In Canada, the new year is celebrated enthusiastically by Chinese community groups all across the country. Our Junior School students were particularly eager to discover more through an active learning experience, dancing spiritedly through our halls.

In our students’ individual and collective quest to be global citizens, they should each want to know more about major cultural traditions – and Chinese New Year is a good example. As cultural diversity is a core part of the fabric of Canada, we want our students to be active in wanting to know more about a wide spectrum of cultural traditions. By their teen years, they should not just wait for teachers to update them on key cultural information.  We want them to want to know more.

Trade between Canada and China has exploded in recent years to a peak of approximately $70 billion last year.  Canada imports mostly electrical, mechanical and manufactured merchandise from China while we export a lot of raw materials to fuel China’s massive economy.

I am pleased that 17 LCC high school students will be travelling to China this March Break with Mr. Vlahogiannis, Ms. Leiter, & Mr. Lee.  They have been gathering weekly to learn more about Chinese history, language and culture. I look forward to hearing from the group when they return in the spring. I’m sure they will be very keen to teach us more about one of the world’s oldest cultures and most vibrant economies. – Christopher Shannon, Headmaster