LCC students Victor Zhao’13 and Andrew Hamilton’13 had the opportunity to participate in ArcticNet’s  Schools on Tundra program during the March Break.

“Students and teachers participating in the Schools on Tundra program [had] the unique opportunity to conduct authentic field research in the sub-arctic, engage with scientists working out of the [Churchill Northern Studies Centre] and participate in lectures and workshops. Participants also [experienced] the diverse geology, biodiversity, cultural history, and wild beauty that the area around Churchill offers.

The program was hosted at the Churchill Northern Studies Centre (CNSC), a hive of scientific activity located outside of Churchill, MB Canada. Here, scientists are trying to increase our understanding of the changes that the sub-arctic is experiencing due to global climate change.”

Today was a very packed day in Churchill. After an early wake-up (6:30!), we continued working on our model rockets. Most people finished assembling their rockets. I’m very excited for Monday’s launch!

At about 10:30, we left for the day’s main event: dog sledding! We arrived at Blue Sky Expeditions a half hour later, eager to begin. Gerald Azure, the founder and trainer, walked us through how the sleds work. There were two sleds: one with space for one passenger, and the other with space for two. Both sleds were each pulled by a team of seven dogs. Blue Sky is unique in the way it treats its dogs; they believe strongly that the dogs shouldn’t be overworked, so each dog is “retired” into adoption at age eight. One of the dogs, who ended up being a lead dog for us, had recently been rescued from a home where she had been abused. You could see in both her timid nature and the scar above her eye that something wasn’t quite right with the dog psychologically.

On a happier note, I think that I speak for the entire group when I say that we had a great time dogsledding. It is a completely unique experience, one which I find difficult to put into words, but I will say this much: The feeling is a mix of exhilaration, empowerment and, well, surprise when the dogs first take off.

Then we went to sleep for the night. Or so we thought. Around 11 o’clock, Max (one of the teachers accompanying the trip) woke us up to take a look at the northern lights. They were by far the best I’d seen so far on this trip, and the viewing dome was completely full for the first time. He managed to get some incredible pictures of the overpowering phenomenon, and those of us who managed to get up were staring at the sky in awe for a while.

When thinking of what I was going to write for this dispatch, I thought it was almost unfair that I got a day that was so full of great activities. That’s when it hit me – it wasn’t that this day was so much better than the others, it’s that every day on this trip has been an incredible experience in and of itself. I feel privileged to be here. —Andrew Hamilton ’13 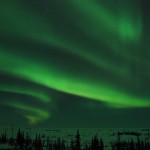 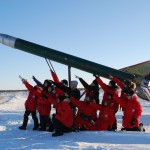 It turns out I’m only getting home today, instead of Friday. A series of unusual circumstances such as satellite problems and weather issues resulted in Schools on Board participants spending an extra 2-3 nights in Kugluktuk. I slept in a bed at the Explorer Hotel in Yellowknife last night for the first time in five nights. Being stranded in an isolated community would not have been bearable if weren’t for all the people helping us in Kugluktuk. The principal of Kugluktuk high school was very accommodating in letting us sleep in the school for five nights. Other community members were also invaluable in driving us to and from the airport each day we tried getting out, as well as helping us find things to keep us busy. All the children greeting us in the streets cheered us up. And if it weren’t for the program coordinator, teachers and parents constantly rebooking hotels and flights, we would never have made it out. It’s been quite the adventure and I’m happy to be finally heading home today. —Karen Butt ’12

In the morning, we crossed the street to go to the elementary school to give the students a presentation about our experience on board the Amundsen. We didn’t realize we’d be presenting to such a young audience, but we did a good job adapting our presentation on the spot. It was nice to hear the students ask so many insightful questions.

A science teacher at the high school then took us for a hike near the Coppermine River, just outside Kugluktuk. He explained the geological history of the area to us, which was much different than learning from a textbook because we were actually standing on the rocks he was telling us about. We came back and presented to the high school students.

We also went to the grade 7 Inuinnaqtun class. An elder in the community told us some Inuit legends and explained the way she lived as a child. I find it remarkable to see how well the Inuit have adapted to a living a Western lifestyle in such a short period of time.

In the evening, we had a community feast. The students performed traditional dance routines for us, and we also had some demonstrations of Arctic sports. We then had a meal with some of the students and other members of the community. I got to try some Arctic char! What a great way to end our stay in the Arctic! —Karen Butt ’12

This morning involved some final packing and clean up, followed by boarding the helicopter to go back to Kugluktuk. No one wanted to get off the ship, but getting another helicopter ride was still fun. Once everyone had been flown over, we started walking from the airport into the community of Kugluktuk. We joined the grade 12 science class and the students took us on a scavenger hunt designed to have us see most of town. Being in Kugluktuk was different because everyone knows each other, and all the people were greeting us and asking who we were.

When we got back to the school, we set up gym mats and sleeping bags on the floor of the school computer lab, our bedroom for the next two nights. Afterwards, we thought about our meals and went grocery shopping. There are only two stores in town: Northern and Co-op. Everything is really expensive and the selection is limited. For example, 12 cans of pop cost $20 and a bag of chips is $6. Fruits and vegetables had to be thoroughly inspected before being purchased. Nonetheless, the pasta we cooked for supper was delicious. —Karen Butt ’12

Today, we learned about phytoplankton, which is important because it is responsible for most of the primary production in the Arctic ecosystem. Scientists want to know if the Arctic Ocean will be emitting or absorbing CO2 in the future due to climate change.

It’s starting to feel like we will be leaving the ship really soon. We started discussing a farewell presentation for the scientists and crew. The helicopter pilot also started giving safety briefings to prepare us for getting off the ship.

Even though we are leaving soon, we are still doing exciting activities. The chief engineer gave us a tour of the engine room this afternoon. It was very loud and smelled like diesel, but it was cool to see the inner workings of the ship. What I found interesting was the fact that the heat from the engines is used to boil seawater in order to obtain freshwater for the ship. —Karen Butt ’12