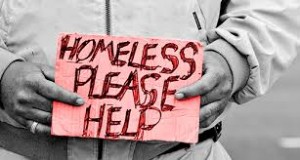 I walked in someone’s shoes the other day. What I mean to say is that for one night, I voluntarily slept outside. For one night, I was like the homeless who more and more frequently sleep on the doorsteps of stores and churches, right here in my prosperous city. But, in truth, not really. Unlike the men and women who cannot find or who refuse to seek shelter, I was in the warmest sleeping bag my neurotic and overly protective mother could find; I slept in a quinzee which served as a perfectly adequate shelter, surrounded by friends, protected by teachers. Unlike the men and women who sleep outdoors, I haven’t been ignored, eyed malevolently or stared at contemptuously. My night spent outdoors has earned me a lot of (frankly not quite deserved) sympathy. Still, a little glitch in the zipper of my ultra warm sleeping bag meant that I shivered during the night. It was not totally pleasant, and perhaps explains why today, a few days after my winter experience, I stopped before the man seated on a threadbare blanket in the snow. He held a cardboard, with the heartbreaking words, ”hungry and cold”. I just couldn’t do otherwise. I couldn’t bear to ignore him. I gave him all the change in my wallet.

I have read enough on the issue of the homelessness to know all the arguments against giving loose change to the cold and hungry men and women in the street. I have been warned that my poor dollar would be used to buy hard drugs; that most of those who appear to be homeless are not homeless at all; that they contribute to the decline of neighborhoods, that it is best to leave their fate in the capable hands of organizations. This may be true. It is undoubtedly true, at any rate that dropping a few quarters in a cup will not solve, not even temporarily, the issue of homelessness. Except that I have no hard evidence at all the man shivering right before my eyes is a drug addict. I have no real evidence that all men and women on the streets have drug problems. I have no evidence at all the man staring at me, a little incredulously, really has a home to go to. I do not know that organizations have tried to help him. I do know that he is outside in unbearable -30 C weather, and that he is cold. I do know that not a single person, not a single one, has stopped to acknowledge him. Sherbrooke is a busy street, and there have been many pedestrians. Their steps, though, did not even falter as they passed him by. They rushed past him, without a glance, as though he did not exist at all.

I wonder when we have all become so jaded that we do not shudder when confronted with human misery. This is a man sitting before me. He deserves to be, if not helped, at least acknowledged. He deserves to be looked in the eyes. He deserves an “excuse me”, a “hello”, a nod or a smile. I wonder at the level of misery and despair, which moves a man to seek refuge in the frozen streets. My loose change might not have done much good, but it at least served to remind me, and him, that he is a human being, and he matters. If there is the least little doubt, I will choose to err on the side of compassion.

Service to others is a great Round Square ideal, and it takes a dozen different forms. It does not always have to result in accountable service hours. It does, however, every single time, start with humility and humanity. – David Elbaz ’15, Round Square Head