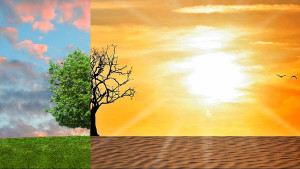 Although this has been a very challenging winter with radical temperature shifts, last summer was the hottest on record in Montreal. Montreal is a city of extremes, shifting from as low as -40°C to +40°C, a major differential and one of the most significant temperature shifts in the world. No wonder our roads are so bumpy with a long cycle of freezing, thawing, and freezing again.

If you harken back to last summer, the extreme heat we had was also experienced across most of North America and Europe, with the hottest spot being in Portugal in July, with temperatures above 45°C. Weather experts expect more of the same next summer.

With extreme heat as an apparent new normal, people need to realize how much energy is expended on air conditioning (AC) in our homes, at work, and in public gathering spaces, such as malls and theatres. But it’s important to also realize that AC is actually heating up our whole planet and scientists predict it could add half a degree to global temperatures by 2050.

As incomes continue to rise in Asia and Latin America, more and more people can now afford AC, which historically has been a luxury in many corners of the world. At current rates, it’s projected that the number of AC units will increase by 250% in the next 30 years. That would mean that all the AC units across the planet would then consume as much energy as all of China does today.

In terms of environmental impact, this would mean 82% more greenhouse gases than we produce now, and half a degree could be added to average global temperatures. Note that heat from AC units in cities can add as much as one degree at night.

According to the Global Economic Forum, 21% of global electricity demand is now being attributed to AC alone. So it’s an area we can and should target for reductions.

One simple way to address this could be to raise so-called comfort zones of AC in homes, restaurants and malls by a few degrees from mid- to high-teens (mid-60s in Fahrenheit) to above 20°c (or mid-70s F), so that the electrically-powered units don’t have to work as hard. I’m sure there are a lot of other innovative ways to cut back on AC energy consumption.

Last November, a new competition was backed by the government of India, with Richard Branson as the spokesperson. The Global Cooling Prize is a prize for innovation in addressing energy costs related to residential cooling technology design. It offers lots of incentives: $3 million in prize money over the next two years. So clearly, it’s a bigger issue than most of us have probably realized until now.

I recently urged our capable senior science students to put on their thinking caps and propose a solution to this mounting global problem. Why not submit an LCC student proposal? The Global Cooling Prize organizers are just waiting to dole out $3 million in prize money! – Christopher Shannon (Pre-U ’76), Headmaster