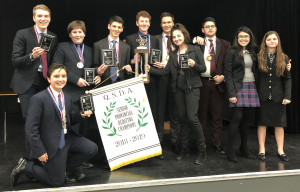 I have been involved with debating since I arrived at LCC in grade 7 and have come to love it. It has led me to exciting opportunities on a provincial, national, and even international level after making it onto Team Canada last year.

While debating is not for everyone, there are definitely tons of people who would love it but who just haven’t given it a chance yet.  Allow me to debunk three myths that might currently prevent you from joining the club.

Myth #1: You should debate for academic reasons. Partly false. Debate will certainly help you academically – with writing argumentative essays and doing oral presentations, for example.   But most of us choose debate because we enjoy it, learn new things, get to travel together and, most importantly, go to The Keg with Mr. George.

Myth #2: You need to be a skilled public speaker in order to be a debater. Wrong. The truth is, you don’t even have to really enjoy public speaking. It is more about the art of arguing than speaking. What you have to say is far more important than how you say it. So don’t hesitate to give it a try even if public speaking is not your strength.

Myth #3: You need to understand all legal principles, the intricacies of international relations and various economic policies. You need to be a moral philosopher and political scientist. False.  Debate motions can be simple questions like whether or not we should try to contact aliens, whether or not we should ban zoos and whether to prioritize saving one child over extending the lives of 5 adults.  It can get more complex, and in order to improve and become more successful, knowledge is needed. However, it is not required in order to enjoy debate.

Here are the most recent results of the LCC debate team:

Based on our performance at the provincial championship, three LCC teams qualified for the nationals. Ella Waxman ’19 and Andrew Vandensbussche ’19, Maren Al Jendi ’19 and Max Schiller ’19, and David Surry ’19 and I headed to Halifax for the competition a couple weeks ago.  Here are a few highlights from the national championship: 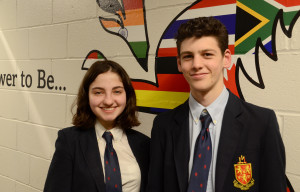 In other exciting news, a couple of months ago, Ella and David were invited to try out for Team Canada after their performance in the provincial championship, which is pretty incredible. Ella made the team, which means that LCC now has two members on Canada’s debate team (including me)!

I hope you now know a little more about debating. Looking forward to seeing some of you around at practices and tournaments. – Matthew Anzarouth ’20