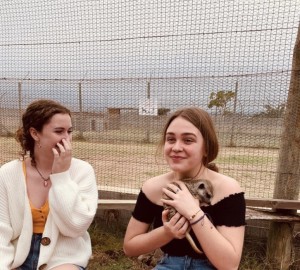 As soon as my plane hit the ground in Cape Town, South Africa at 12:06 am, I knew the six weeks to follow would be some of the most incredible weeks of my life. I was greeted by my host family which included my exchange, Rosie, and her wonderful parents, sister, and three dogs. Over these past two weeks, the once foreign city of Cape Town has quickly become my home away from home and I’ve been pleasantly surprised by the differences as well as similarities this part of the world shares with my own home.

First of all, I have to admit that the weather here is in every way better than in Montreal: in the past week, it has been nothing but sunny and 35 degrees, a definite improvement to the temperature back at home. In terms of the country itself, my host family lives in a small estate called Pear Valley, which is surrounded by tall mountains and lush vineyards. The drive to school is, in one word, breathtaking.

The schools here are very different compared to LCC. First off, instead of walking through a hallway, you walk through gardens or across grassy fields to get to your next class, which I enjoy. Additionally, students in grade 10 are given more freedom when choosing their elective classes. I am currently taking a course in business studies as well as another one in Afrikaans, a language spoken by many South Africans. The sports are also quite different. Netball and water polo are very popular, as well as “social tennis” which, summed up, is tennis for people who are not very good at tennis.

South Africa is currently experiencing a drought as well as electricity shortages, which lead to something called “load shutting”. Every day, for two to six hours, all electricity is cut off, which is something I am not used to, having lived in Montreal all my life. Although it is hardly an inconvenience for people like Rosie’s family who have a generator, many families and most schools are affected by it. That being said, not everything here is different in terms of day to day life and school; the classes are structured more or less the same as LCC and the people here, although from a different hemisphere, are still just as warm and welcoming as my friends back at home.

When I am not attending school, my exchange and I are either meeting up with friends at one of the neighbouring towns of Paarl or Franschhoek, or just relaxing outside in our friend Eva’s pool. Last weekend, I had the chance to visit Cape Town, known as the “cultural capital’ of South Africa. We had lunch on the waterfront, a lively part of the city filled with music, food and tourists. After that, we embarked on a five-hour tour of Robben Island, the infamous island where Nelson Mandela and many other political prisoners were detained between 1964 and 1991, during the apartheid era of South Africa. Many of the tour guides had been prisoners themselves, and it was incredible to hear their stories. To top off the weekend, we visited a cheetah sanctuary and encountered cheetahs, and Rosie and I fell in love with a meerkat named Sebastian.

All in all, it seems impossible to have done so many incredible things in such a short period of time, and yet I can’t believe two week have already gone by. I look forward to my next four weeks here and I can’t wait for whatever this wonderful country has in store for me next! – Margo Baltzan ’20, Exchange Student at Bridge House 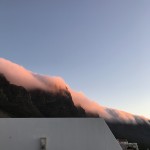 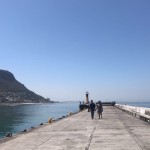