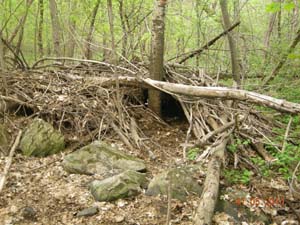 The Corvée du Mont-Royal is an annual event put on by Les Amis de la montagne where groups of people help beautify the mountain by picking-up garbage and planting new trees. On May 2nd, a few students from our Green Team got involved.

The instructions were simple: pick up garbage and, for safety reasons, dismantle campfire pits and shelters. Temporary shelters or lean-tos, right? Not so. These shelters were intricate winter homes made from twigs, tree trunks, and other foliage. They were constructions made by “des castors humains,” as our guide stated.

The shelter that we happened upon had two rooms; crawling space only. This shelter was built for real survival purposes and not some “survival in the woods” contest. Supposedly, the mountain is home to many homeless in the winter time. So, why was I helping to dismantle someone’s home? We were told that it was for safety reasons since the occupants leave their homes in the spring and the unoccupied “shelters” can then be ill-used by others (e.g., the building of bonfires).

The spot was marked for another team to finish the “clean-up.” As we were leaving a heavily laden man was approaching the shelter. He stopped and stared at us. Not a word was spoken. Obviously, this homeless person was not ready to leave his winter home just yet…

The Corvée du Mont-Royal will become one of the Green Team’s regular annual events. We hope you can join us next year. —Vilma Scattolin, Faculty Advisor to the Green team