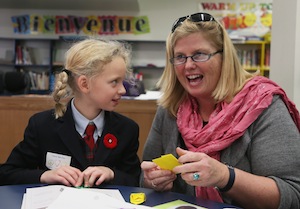 Despite endless media tales of corruption and doomsday scenarios, I believe that we are very fortunate as Montrealers and Canadian citizens. There are also many benefits from being part of our caring and supportive LCC school community.

On our last day of school in December I was struck by a report in the Globe & Mail of a notable good news story reporting that 80% of Canadians have a great day most days. This comes from an international poll of people in 148 countries.  They were asked if they had been treated with respect the day before, whether they had done a lot of laughing and smiling, whether they had experienced positive feelings and had enjoyed their day.  Eighty per cent (80%) of Canadians felt positive about most of these elements of their lives – which tied for 11th out of 148 countries worldwide, tying us with Colombia, Malaysia, the Netherlands and Ireland. We were ahead of countries like the UK, the United States, Australia and France (all in the mid to low 70’s).

Notably, all of the countries with the highest rate of positive responses – the top 10 – are all in so-called “developing nations,” and eight of those are in Latin America, led by Panama, Paraguay, Venezuela, and followed by Trinidad and Costa Rica.

So on this scale – what I will call a “Happiness Quotient” – it appears that above a certain level, the old adage is correct: “money does not buy happiness.” Singapore, the 5th wealthiest nation on earth, earned the lowest score at 46%, while Panama which only ranks 90th in income per person tied for 1st.

The pollster, Gallup, cited the research of two Nobel laureate economists (Daniel Kahneman & Angus Deaton) of Princeton University who concluded that earnings only have a positive impact on emotions up until $75,000.  Beyond that, additional income does not appear to make any difference at all – an important message for all of us in our money-obsessed culture.

So why do Latin Americans stand out at the top of the pack? It appears that a significant emphasis in Latino culture on the value of family & friends contributes to a particularly positive outlook on life. This was affirmed in my very unscientific straw poll of one person. I recently spoke with LCC Spanish teacher Señora Navarette , who is originally from Chile. She knew nothing about the poll, but she was not surprised when she heard the results for Latin America. She affirmed immediately that general happiness in Latin America is closely associated to family, friends and community as most important in life.

So why is Canada among the happiest of the world’s wealthiest countries?  Well, we enjoy a great deal of personal freedom, our crime rates are low and we have government policies and programs that reduce social inequality compared to other peer countries. It is also believed that immigration is likely an important factor.  At 250,000 people per year, on a per-capita basis, Canada has more people arrive on its shores than any other developed country in the world.

So diversity and a genuine comfort with multiculturalism as a norm, likely have a positive impact on the way we see the world and feel about our daily lives in Canada. As the Globe & Mail article on this poll stated in December, perhaps we should not over-analyze the data, but instead, focus on some of the feelings we all no doubt felt over the holidays when we looked back at 2012.  We are lucky to live in a beautiful country with a diverse and generally upbeat population.

In many ways Canada is a beacon to the world – civil, prosperous and safe. I hope you count yourself among the contented.  I also hope that for the rest of this year you will appreciate your many blessings and do your best to celebrate family, friends and our school community – for therein lies our greatest riches and relationships that are the seeds of true happiness. —Chris Shannon, Headmaster