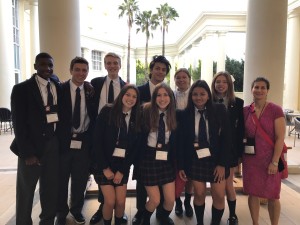 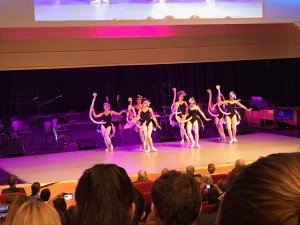 On the first morning of the Round Square Conference, we headed to the Cape Town International Convention Centre to take part in the Opening Ceremonies. Our delegation, along with many others from around the world, was very excited for the inauguration of the conference.

Once everyone had been seated, a group of three musicians came on stage with some odd-looking instruments. Using only her actions and no words, the leader of the group instructed us to reach under our seat where we were all surprised to find a tube with a wooden stick. The audience then began copying the musicians’ rhythms and joined them in a couple of neat patterns. My favourite part was when we were instructed to each play a different beat depending on where we were sitting in the auditorium. Every section’s tube produced a different sound and we united with our separate rhythms to create a beautiful song. It was lots of fun and a great way to get us excited for the rest of the ceremony.

Another part of the ceremony that I really enjoyed was the presentation of the flags. One by one, every school was called and a student walked across the stage holding their flag. I thought this was very interesting since every school had something that was unique and different. Some of the uniforms were particular to the region they were from, while others had different emblems and flags that didn’t at all resemble the others. It was also a special moment when the name Lower Canada College was said out loud and our flag was proudly walked across the stage.

The rest of the ceremony was filled with different cultural performances by the host schools, award presentations and a couple speeches, but none was as memorable as His Majesty King Constantine’s speech. The current president and one of the earliest members of the organization, King Constantine attended the ceremony and we were fortunate enough to hear him speak. However, when he started speaking about Round Square, he began to choke up and shed a few tears. This was a truly touching moment for everyone in the audience and it was at this moment that I realized the full extent of Round Square’s influence and the power that it possesses to bring together people from all four corners of the world who share the same values.

Overall, I felt very lucky to have been in that auditorium for the Opening Ceremonies and I think that it was a phenomenal way to kick off the festivities. – Andrew Fata ’19