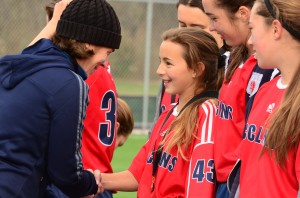 The past week has been a very good one for LCC Athletics. Congratulations to the Juvenile Girls Soccer and Bantam Boys Soccer teams who won the championships in their respective GMAA soccer leagues. My congratulations as well to all other teams during our fall athletics season – and to all coaches for their significant support and guidance of our scholar athletes. Some of the most memorable experiences in athletics this fall may have come from students who were not on championship teams; there was surely a lot learned in a wide array of experiences – in living them and reflecting on them.

This brings me to sport at the international level and lessons learned from a titanic match played last Saturday in the final of the World Cup of Rugby that occurs only once every 4 years. For those who are not big rugby fans, it is worth noting that rugby has a wide global audience in both the northern and southern hemispheres. In fact, the World Championship tournament, hosted this year in the UK, is the world’s third largest sporting event after the World Cup of Soccer and the summer Olympics. It runs for weeks, culminating this past weekend with a TV audience of more than 120 million.

On Saturday, New Zealand and Australia met in the World Cup final match for the first time, despite their excellent reputations and deep rugby traditions. New Zealand was the defending champion from four years ago, so the team was also vying to be the first country to win back-to-back world championships – a very tall order indeed.

Going into the game, both teams were undefeated with spotless records in the tournament. So with millions of fans watching, a lot was on the line – and a lot of pressure was on the shoulders of those professional athletes and their coaches.

The match itself did not disappoint. Played at Twickenham stadium in London in front of 85,000 fans, it was a very impressive display of skill and competition at the highest level. The New Zealand All-Blacks emerged triumphant after a very memorable hard-fought game played by what were clearly the two best teams in the world today.

Interestingly, I believe there is something special to be learned from this tournament and the New Zealand All-Blacks in particular. It has to do with something fundamental that I believe has been lost among many professional athletes in Canada, the United States, Europe and South America. That something is humility with a strong focus on sportsmanship and genuine respect for one’s opponent.

In our culture of athletic trash talk and media denunciation of peers by some professional athletes, it’s often unfortunate that certain players are role models – and too often the behavior and attitude drops down to youth sport, which in my view, is a true disappointment and at times a travesty.

New Zealand has always embraced rugby as its national game and a great way to build friendships and community. Most children in that small country of only 4.5 million people play the sport, starting with organized touch leagues for 4-year- olds and they progress from there. At every level there is a strong emphasis on sportsmanship, and it’s only been about 25 years since the men on the national team have been paid professionals. Until then, farmers, mechanics, teachers, office workers and others would rise to the national level and would have to take holiday time from their full-time jobs to experience the distinct honour of representing their country at the international level. But once an All-Black, always an all-Black, and men would take that mark of distinction to their graves. Whole communities were proud to have an All-Black in their midst, even under a gravestone.

So after more than two decades of professional rugby, where even the All Blacks played their sport full time as professionals, in came coach Steve Hansen in 2012. He took issue with the verbal snipes and jibes that our media culture helps to make the norm in professional sport and he set out to change it. And change it he has done, embracing what can only be called “old-school values.”

Despite the strength and dominance of the All-Blacks, Hansen emphasizes respect for the effort and contribution of all players in a match to do their best – on both teams. So Hansen decided to do something radical in professional sport:  At the end of every international match the All-Blacks invite their opponent into their dressing room as a sign of respect and camaraderie. That’s exactly what happened at the World Cup matches in the UK and the effect has been notable and positive.

Team results remain hugely important, but Hansen didn’t want them to be the sole mechanism by which his team is judged. Nearly as important is the manner in which his players conduct themselves on and off the field.

Hansen has ben quoted as saying “we acknowledge we have played another group of men who have tried to do what we have done. So we say, ‘would you guys like to come into our changing room?’ They are all ordinary guys and they make lifelong friendships.”

Players from Namibia and Georgia were blown away to be invited into the All Blacks’ changing room after their matches in the World Cup. Their players queued for the opportunity to be pictured with the All-Black veteran star players and didn’t want to leave. They arrived with jerseys to hopefully swap and cell phones poised for personal keepsake photos. They expected ferocity on the field and had no idea they would encounter such warmth and camaraderie off of it. It was a massive gesture by the All Blacks – as few champion teams would extend that sort of invitation and engage for so long and readily with any opponent

In our hyper competitive culture of athletics and media presence, there is much we can learn from that small nation in the pacific. What’s the core learning? In essence, humility, respect and community always trump greed, arrogance and trash talk.

I have asked our high school students to give this some thought as they begin their next athletic season, in their dealings with friends, debating opponents or colleagues at Model UN’s or other activities. Competition is healthy, but respect and collaboration trumps undermining one’s opponents. We all need to think about that in practice! – Christopher Shannon, Headmaster