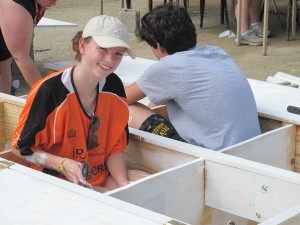 We felt it for the first time this week; spring was definitely in the air. After a long, dark winter, we are finally about to experience the change of season. Spring is such a wonderful time of year. It is a time of rebirth and renewal for the natural world and one cannot help but be inspired its magic. I love the smell of the earth reemerging after the snow melts.  Then comes the return of green grass, colourful flowers, bushes and a canopy of leafy trees.  Without fail, every spring I marvel at how this annual cycle of renewal occurs.

Spring is symbolically the season of firsts and things new. In recent weeks, in the larger world, there have been a lot of new developments and firsts worth paying attention to.

Pope Benedict resigned and a new Pope was selected as the spiritual leader of the world’s 1.2 billion Catholics. This new Pope is a first in that he is the first non-European to take on this leadership role.  As a cardinal from Argentina, Pope Francis is the first Pope from South America – and his first decision was to choose the name “Francis” in honour of St. Francis of Assissi who lived in the 13th century.  Inspired by the writings of St. Fancis, this new Pope is clearly orienting his papacy toward the world’s poor, oppressed and marginalized. He has also pointed to the significant importance of nature and its protection.

While the Pope was directing his followers to the needs of the world’s poorest citizens, two weeks ago the United Nations published its annual report on the state of the world, in the 2013 Human Development Index.  It is interesting to note that the 2013 report was unveiled in Sierra Leone in Africa, a region that has actually made notable advances in recent years.

Entitled, “The Rise of the South: Human Development in a Diverse World,” the UN report notes profound shifts in global dynamics driven by the fast-rising new powers of the developing world and long-term implications for human development and shared challenges such as climate change, trade and  technology.

The report identifies more than 40 countries in the developing world that have done better than had been expected in human development terms in recent decades. Progress has actually accelerated markedly over the past ten years.  That’s good news – and the ramifications for all of our students in their adult lives will be profound. So we need to help them learn about these important shifts and develop skills to adapt to new realities.

A number of LCC students returned to school last week after experiencing notable firsts. Our Senior Boys Hockey team went to Scandinavia, a first time in Europe for many of the boys.  Our Duke of Edinburgh Gold trip ventured down to Lima, Peru with four members of faculty.  Students completed service work in an urban slum, and hiked to Machu Pichu—surely life-changing firsts.

Several of our students also returned recently from school exchange experiences in Australia, Africa and Europe where they were “forced” to be more independent and had the opportunity to explore new and interesting cultures. I read their blogs and commend them all for their courage and willingness to seek new and challenging opportunities. They all experienced a number of firsts. Those experiences are now etched in their minds and will help to define them as they progress through school and life.

As we begin this final semester of the year, I urge all of our students to be open to the wonder that comes with spring. I also encourage them to consider how and where they can experience some memorable firsts at LCC that will influence, change or maybe even define them for years to come. – Chris Shannon, Headmaster