Upon my return to Peru, I did not know what to expect. I would soon find out that, although many landmarks were familiar to me, I was seeing everything in a completely new light. I was wiser and the shantytowns of Lima didn’t shock me. Rather they incited me to want to get to work immediately!

We spent four days in Las Palmas completing our community service project, which included a new set of stairs, a new fence, a fresh coat of paint and a new roof. By the fourth day, every student had mixed feelings about leaving Las Palmas. Although we may have been filled with excitement with the prospects of beginning the hike in Cusco, we would be leaving behind a community to which we had grown very close.– Emily Tiberi ’12

Five days ago, eighteen LCC students who would work on the service project in Las Palmas flew into the desert city, Lima. With last years experience doing the service project and the Salkantay Trek, I didn’t feel nervous. I was rather excited to see how things had changed over a year.

Every morning, when driving to Las Palmas, I noticed that the poverty levels hadn’t changed. The chaotic way of life and the number of shantytowns stacked on the desert was the same. It seemed as if I had not left Peru last March. When working at the community, the locals treated us with the same respect and warmth they had shown us in 2011. I remembered their names and faces and so did they. Under the scorching heat, we worked on the concrete roof until the very last minute. Today, we fly to Cusco. We are anxious about the hike, but at the same time, excited to walk the same path where Incas and adventurers explored.– Kenya Shatani (Pre-U ’12) 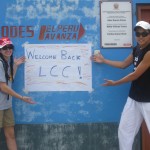 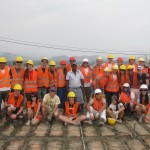