Everyday I am learning more and more about the Thai culture, vocabulary and I am meeting new people. Thailand is a beautiful country. It is very green and has many mountains. There are many animals as well as reptiles and insects. For the first time in my life I observed a gecko in action as he discretely hunted for his prey. There are also many cockroaches and lizards! From the climate, to the food, to the culture, animals, infrastructure and much more, everything was so different from what I was used to but I love it all and was so glad to have chosen Thailand!

On Friday, our boarding group went to a mall named Bixi. At this mall we found many small Thai shops as well as the common stores. At Bixi I got the chance to see many of the traditional Thai clothing, bags and foods. Traditional Thai clothing is very colourful and has many designs varying from animals to shapes.

On Saturday, we went to a huge shopping centre, Siam Paragon, in Bangkok. At this centre, anything was possible to find. It consisted of seven stories, each having its own purpose. It had many European and American stores as well.  As we drove I was able to see little parts of Bangkok that were very industrialized and busy. Every street was crowded with people. Many people drove on motorcycles, and those who didn’t fit into cars sat on the back of the vehicle as they drove to their destination. Though it is very industrialized, there are also many poor areas. There are many people who live on the streets and many others simply asking for money. It had come as a shock to see so many people living on the streets in a city that seemed very industrialized and quite developed.

On Sunday, my friend Ellis took me to an elephant orphanage! I sat on a 40-year-old elephant as he walked the green mountainous streets of Thailand. I not only experienced something exceptional but I also witnessed the ways many people unfortunately live. On the trek, we passed many slums, where people lived in very small shacks and in horrible conditions. I somehow knew that this was a reality but did not realize how serious it was.

I never thought I could build such great relationships with people that I had only known for two and a half weeks. I am having a great time here and I enjoying every second, of every minute of every day. As everyday passed, I realized that soon I would have to leave and I just wished that I could stay longer. – Kamy Roberge-Carrington ’16 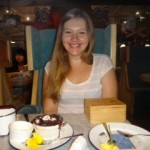 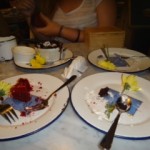 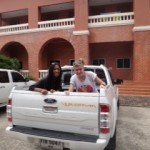 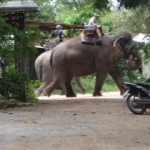 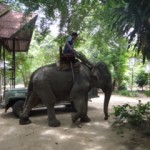 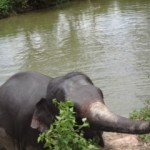 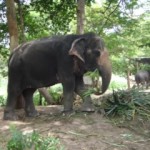 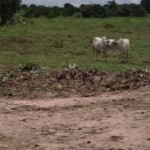 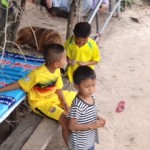 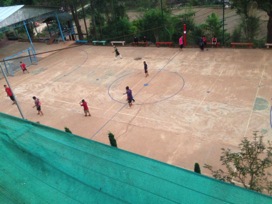 After a week and a half in Thailand, I began adjusting to the 12-hour time difference and the huge culture change in this beautiful foreign country. I have been staying in the boarding house at the Regent’s School and have met other boarders from many different places around the world from Russia to Lithuania. On February 16th the school had a 10- day break for their half term. During this time they offered a community service project trip to northern Thailand near the popular city of Chiang Mai. As an exchange this brought an amazing opportunity to travel the country more and I was excited to see cities other than Pattaya.

Once we got to the Ban Maelid School, our home for the next five days, we were greeted by about 100 young Thai students bowing at us as we passed by them in the cars. We got to meet the kids briefly and then toured the school. First, we were shown the bathrooms which were Thai style, meaning the showers were buckets of cold water that you pour onto yourself, and you had to squat for the toilet. This was a huge change and it was somewhat good news to hear that we were sleeping on the classroom floors.

Spending five days at this school was life-changing. We got to rotate between four activities  throughout the day. The first was learning the students’ language and culture known as Karen, the second was teaching the children English, the third consisted of a P.E. class where we played sports with the kids, and the last was helping the community construct a water tank which included building a cement wall. Everyday surpassed the last as the kids were so friendly and eager to learn, and the staff were so welcoming and hospitable. It was very difficult to communicate with the students because we didn’t speak the same language, but I still had the opportunity to make many friends.

It was hard seeing the villages the students live in because it seems so unfair how these kids deserve so much but have so little. Yet despite this they are always so happy. I learned how skilled they become at inventing fun activities to do with their friends to pass the time while simply using rocks or sticks.

On our last night we had a bonfire with the small group of Ban Maelid students that board at the school. After eating, everybody started dancing and we got to experience traditional Thai dancing. It ended up being a huge dance party around the fire pit and everybody was having fun doing the Gagnam Style and the Macarena!

The following day we got ready to leave and had to say our farewells to the Ban Maelid family. As we said goodbye to the students, they gave us tons of bracelets and letters that they made and it brought tears to most of our eyes. It was sad leaving, but it made me realize how lucky I was to have done this trip and it didn’t truly feel like I was doing community service but more like I had been given the gift to meet these wonderful and unforgettable people. –Sarah Humes ’15

Enthusiastically greeted by young orphans proudly waving the Greek flag, King Constantine followed by his wife and daughter walked through the doors of the Pattaya Orphanage. Joined by Mr. Shannon and other delegates, the six of us entered the orphanage excited to begin a day of service alongside the King. We were split into different groups to work with assigned age groups. The groups consisted of babies, toddlers and pre-school children. We were blessed to have the opportunity to interact with them through a series of different games and activities.

Greg, Hutch and Elle began the day with the pre-school children and had an amazing experience playing with them. Elsa, Caroline and Mr. Shannon started off with the babies. They helped the caregivers of the orphanage prepare the babies for bed and comfort them. Sasha had the chance to be placed with a room of toddlers who were all ecstatic because they had a new playmate.

We were extremely moved by the children’s warmth and affected by the lack of attention they receive. We could feel the impact we had on their day—not to mention their futures—and how much they appreciated our company.

In keeping with the conference theme “We Walk Together,” this day could be subtitled “We Smile Together.” The laughter and joy throughout the orphanage was infectious and we made them feel like they too were a part of the conference. We hope to have many more experience like this to follow.